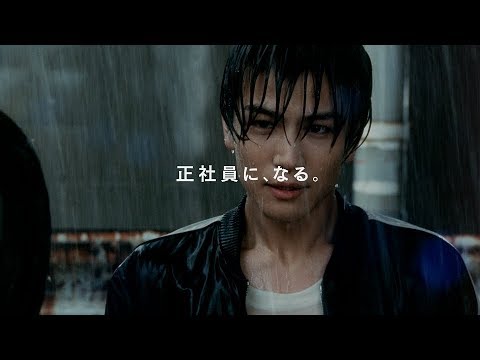 Takanori Iwata is a member of EXILE.
He is saying on this TV ads “Let’s live together, I will be a Regular employee”.
This would be funny for people overseas. In Japan, becoming Regular employee is a kind of strong status for men.

Some people said.
“Say this! after you become a regular employee haha”.

Anyway, this could be quite attractive for who are fun of him.

the next CM is talking with his mother.
“Sorry that I have been making you worring me so long, I will be a regular employee”. in his old car…

He was born in Aichi prefecture. and born on 1989/3/6. His high school was Keiogijyuku high school which is quite famous. He was nominated as a representative of Lacrosse player under 19 in Japan when he was in high school student. He entered Keiogijyuku University and joined to Dancing Crew Jade and became the leader of it.
He was nominated as the last member of Mr. Keio contest 2009 (which decide who is the best looking guy in the University). He was invited by Naoki in 2010 and stopped finding normal job. he became a performer of Third generation J Soul Brothers.